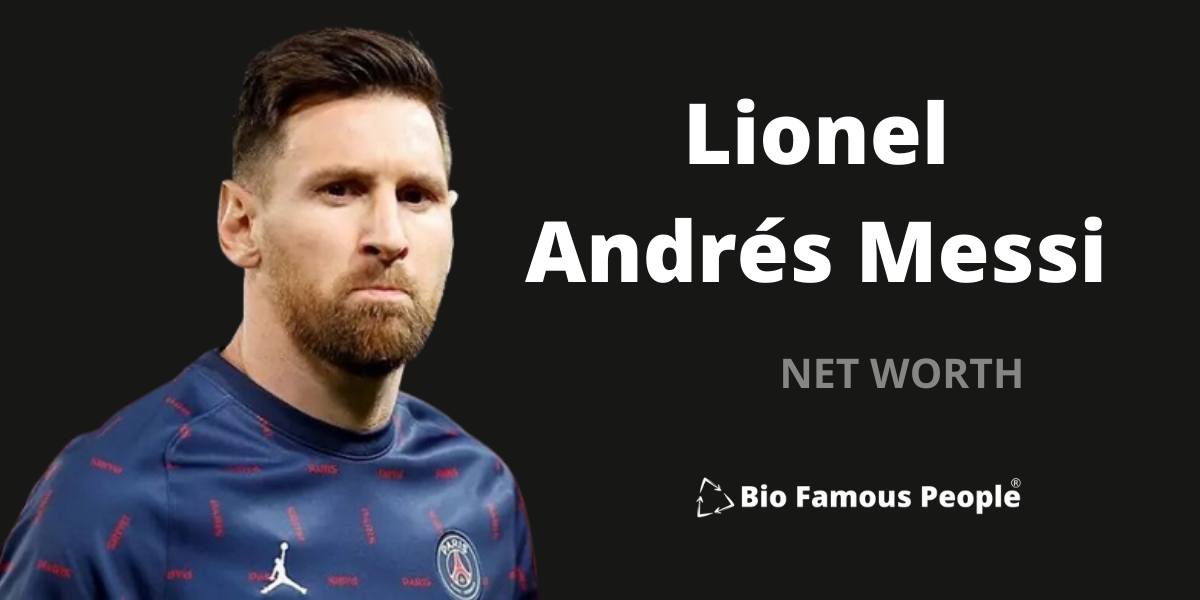 Lionel Messi is a soccer player with FC Barcelona and the Argentina national team. He has established records for goals scored and won individual awards en route to worldwide recognition as one of the best players in soccer.

Lionel Messi was given birth on June 24, 1987, in Rosario, Argentina, to a steel factory manager, Jorge Messi, and his wife Celia Cuccittini. His father was a factory steelworker and his mother was employed as a part-time cleaner. Messi was the third of four children they gave birth to. He grew up in a family where the game of football was adored. As a young boy, Messi tagged along when his two older brothers played soccer with their friends, unintimidated by the bigger boys.

At the age of five, Messi started playing for the Grandoli, a local club coached by his father. By the time he turned eight, he was playing for Newell’s Old Boys. The group was immensely talented, which is visible from the fact that they lost just a single match in the next four years.

It was their sheer interest and talent for the game that made the group popularly known as ‘The Machine of ’87’. At Grandoli his grandmother accompanied him to his matches as well as training. He was thus affected by her. His unique style of celebration which involves looking up and pointing to the sky is a tribute to his late grandmother.

Recognizably smaller than most of the kids in his age group, Messi was eventually diagnosed by doctors as suffering from a hormone deficiency that restricted his growth. Messi’s parents, Jorge and Cecilia, decided on a regimen of nightly growth-hormone injections for their son, though it soon proved impossible to pay several hundred dollars per month for the medication.

It was at this juncture that Carles Rexach, the sporting director of FC Barcelona, came to his aid. He promised to offer help to Messi by paying for his medical bills only if the latter moved to Spain. Messi was enrolled at Barcelona’s youth academy.

So, at the age of 13, when Messi was offered the chance to train at soccer powerhouse FC Barcelona’s youth academy, La Masia, and have his medical bills covered by the team, Messi’s family picked up and moved across the Atlantic to make a new home in Spain. Although he was often homesick in his new country, Messi moved quickly through the junior system ranks.

Messi’s career kickstarted in the year 2000 when he played for the junior system ranks. Within a short span, he became the only player to play for five different teams. Messi has only played for FC Barcelona, where he first signed at age 13. He also plays for the Argentina national team.

Messi progressed through the ranks of Barcelona’s junior team, leading to his move to the senior team. He debuted for five teams in a season. During the international break, Messi was among the few players who helped strengthen the first team in the absence of the players. Messi finally debuted for the senior team at the age of 16. Messi’s wondrous performance earned him the friendship of Barcelona’s star Ronaldinho, who enabled him to have a smooth transition into the first team.

His remarkable antics earned him a juicy contract in 2004, the first professional contract he signed, which had a buyout clause of 30 million euros which increased to 80 million euros.

He received Spanish citizenship in September 2005, which finally made it possible for Messi to make a debut in the Championship League. His first goal came on May 1, 2005, against Albacete. He created history by being the youngest to ever score in a La Liga game for Barcelona.

Messi’s first outing at the Champions League was against Italian club Udinese. Though he entered the field as a substitute, he played amazing soccer with Ronaldinho, the two sharing good chemistry over passing and receiving the ball.

In the 2006-07 season, In the 26 outings, he successfully netted the ball fourteen times.

2009 was a successful year for Messi. He steered Barcelona to a wealth of success, most notably in 2009, when the left-footer’s team captured the Champions League, La Liga, and Spanish Super Cup titles. That same year, after two consecutive runner-up finishes, he took home his first FIFA “World Player of the Year” honor/Ballon d’Or award. Even the great Maradona gushed about his fellow countryman. “I see him as very similar to me,” the retired player told the BBC. “He’s a leader and is offering lessons in beautiful football. He has something different than any other player in the world.”

Amazingly, the soccer wizard continued to improve, discovering new ways to elude defenders while leading Barcelona to La Liga and Spanish Super Cup championships in 2010 and 2011, as well as the ’11 Champions League title.

2010 was a year of a hat-trick for Messi as he scored against CD Tenerife, Valencia CF, Real Zaragoza, thus becoming the first Barcelona player to score back-to-back hat-tricks in La Liga. In a match against Arsenal, Messi went on to score four goals. The year ended with Messi scoring 47 goals and 11 assists in all competitions. Messi embarked on an all-out assault on the record books in 2012.

He became the first player to score five goals in a Champions League match in early March, and a few weeks later he surpassed Cesar Rodriguez’s club-record 232 goals to become Barcelona’s all-time leading scorer. By the end of 2012, Messi had accumulated an astounding 91 goals in club and international play, eclipsing the 85 netted in a single calendar year by Gerd Muller in 1972. Fittingly, he broke another record when he was named the FIFA Ballon d’Or winner for the fourth time in January 2013.

In the 2013–2014 season, Messi signed a new contract with Barcelona. After Messi sustained an injury and was deemed unfit for Barcelona’s champions league match against Bayern Munich, the Catalan Giant were defeated 7-0 on aggregate. His campaign that season was the worst he had in five years. He signed a new contract with Barcelona which saw his salary increase from 20 million euros to 36 million euros.

Under the leadership of the new coach, Luis Enrique. Messi became La Liga’s all-time top-scorer. He came second in the 2014 FIFA Ballon d’Or awards for the second time in a row. Messi established an attacking trio with teammates Suarez and Neymar which prove to be deadly to opponents. At the end of the season, he received the UEFA Best Player in Europe.

In the 2015–2016 season, Messi became the youngest person to make 100 appearances in the champions league. Messi also helped Barcelona claim the 2015 Club World Cup Final, where he was awarded the tournament’s Silver Ball. Messi emerged a runner-up to Cristiano Ronaldo in the 2016 Ballon d’Or award as well as the 2016 Best FIFA Men’s Player Award, he also claimed the Pichichi and European Golden Boot.

Messi also had a spectacular and incredible performance in the 2017–2018 season, but not spectacular enough to earn him the Ballon d’Or award. Messi was handed the captaincy in the 2018–2019 season following the departure of Andres Iniesta.

Messi has had quite a couple of romantic associations before he got steady with his wife Antonella Roccuzzo. He was first linked with Macarena Lemos, a female from his hometown Rosario. He is even said to have shared a love bond with Argentine glamour model Luciana Salazar.

Messi was first seen with his wife Roccuzzo at a carnival in Sitges after the Barcelona-Espanyol derby. Their wedding was held at a luxury hotel named Hotel City Center in Rosario. They got married in Rosario, in 2017. They gave birth to their first son Thiago in 2012, their second Mateo in 2015, and last Ciro in 2018.

Leo Messi has always remembered his origins as well as all the help he had from others when he struggled as a kid and a young adult. This is why, in addition to working as a UNICEF ambassador, he created the Leo Messi Foundation in 2007. The foundation is a charity organization that focuses on children’s healthcare and education.

Since its creation, the Leo Messi Foundation has invested in research for fighting diseases like childhood cancer, providing infrastructure to Spanish hospitals, and promoting education and sports. The foundation is also associated with the Special Olympics committee to normalize and encourage practicing sports for children with disabilities

Leo Messi is very vocal about his charity work. Although he is known to be a shy person, he makes an exception for ads that raise awareness about certain social issues that he is concerned about. He even celebrated his son Thiago’s first birthday by working with UNICEF and talking about preventing child mortality.

He also donates part of his salary to charity, donates his soccer gear or uniforms for fundraisers and auctions, and has organized several matches called “Friends of Messi”, giving all the proceeds to his foundation.

1.“You have to fight to reach your dream. You have to sacrifice and work hard for it.”

2.“A lion doesn’t concern himself with the opinions of the sheep.”

3.“You can overcome anything, if and only if you love something enough.”

4.“Money is not a motivating factor…My motivation comes from playing the game I love. If I wasn’t paid to be a professional footballer, I would willingly play for nothing.”

5.“Being a bit famous now gives me the opportunity to help people who really need it, especially children.”

6.“Every year I try to grow as a player and not get stuck in a rut. I try to improve my game in every way possible. But that trait is not something I’ve worked on, it’s part of me.”

7.“The only thing that matters is playing. I have enjoyed it since I was a little boy, and I still try to do that every time I go out onto a pitch. So, I always say that when I no longer enjoy it or it’s no longer fun to do it, then I won’t do it anymore. I do it because I love it and that’s all I care about.”

Who is the No 1 footballer in the world?

Leo Messi is the number one Footballer in the world.

Who is faster Ronaldo or Messi?

Leo Messi is the faster footballer than Ronaldo.

Who is the king of dribbling?

Leo Messi is the KING of dribbling.

Who is the king of free kick?

Leo Messi is the King of Free-Kick.