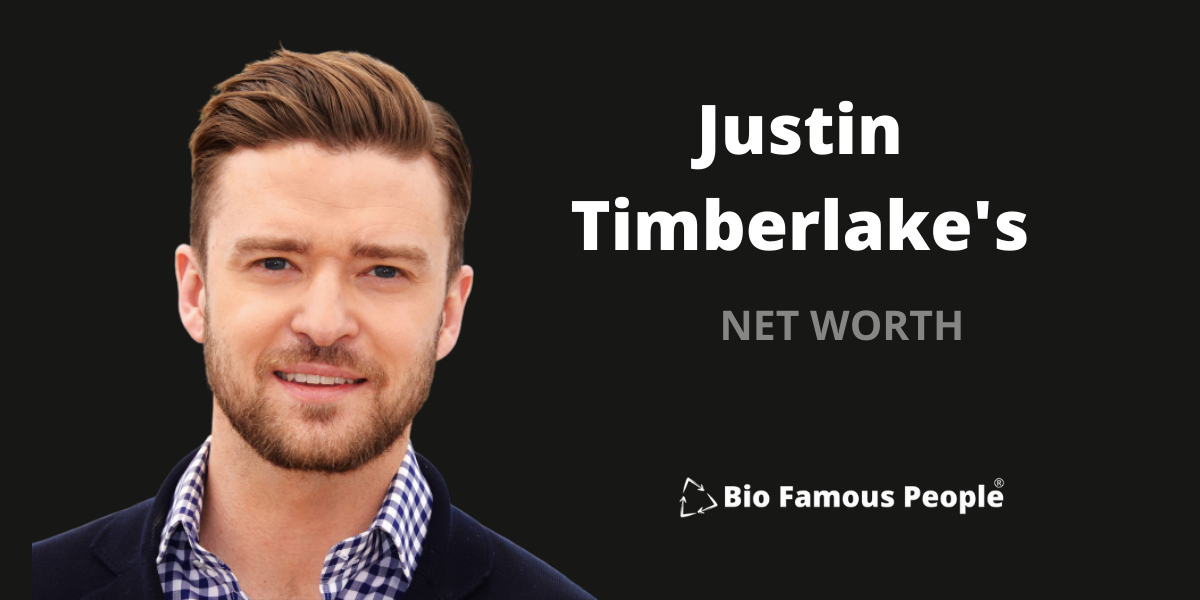 Justin Timberlake’s: Six times Grammy Award winner and 20 times Grammy Award-nominated singer, Justin Timberlake are one of the most popular and commercially successful singers across the world. He is one of the bestselling artists, whose albums have topped the charts and have sold millions of copies worldwide. He rose to fame as the youngest member and lead singer of the boy band ‘N Sync’, which is considered the third best-selling boy band in the music industry.

He later went on to pursue a solo career and released the bestselling albums ‘Justified’, ‘FutureS*x/Love Sounds’, and the recent album ‘The 20/20 Experience. Widely regarded as the ‘prince of pop music’, Timberlake has established himself as one of the ‘A list celebrities in the entertainment industry. With an estimated net worth of $250 million, Timberlake is one of the wealthiest stars in the American music industry.

He is also an upcoming actor who has appeared in films like ‘The Social Network, ‘Friends With Benefits, ‘Alpha Dog’, ‘Black Snake Moan’ and ‘Richard Kelly’s Southland Tales. To learn more interesting facts about his childhood, personal life, and professional achievements, scroll down and continue to read this biography.

What is Justin Timberlake’s Net Worth?

Justin Randall Timberlake was born on January 31, 1981, in Memphis, Tennessee to parents Randall “Randy” Timberlake and Lynn Bomer. He spent his childhood days in Shelby Forest. Raised a Baptist, Timberlake grew up singing in the church choir. His family circle also included a number of musicians who nurtured his talent, including an uncle who played in a bluegrass band and a grandfather who first taught the young Timberlake guitar, and who had himself jammed with Elvis Presley.

His grandfather also introduced him to the songs of Willie Nelson and Johnny Cash. At the same time, his father played him songs by bands like the Eagles and Queen. Memphis was also home to the blues and he got turned on to the likes of B.B. King and others. In 1985, his parents divorced.

Both have remarried and the extended family remains close. He has two half-brothers on his father’s side. His half-sister died shortly after birth and Timberlake would pay tribute to her in the *NSYNC song “My Angel in Heaven.”

At the age of 11, he played the role of the country music singer ‘Justin Randall’ on the TV show, ‘Star Search’.

In 1995, he became a part of the American boy band ‘N Sync’ which was organized by the manager, Lou Pearlman.

In 1996, ‘N Sync’ released their first single titled ‘I Want You Back, which was a major hit that year and topped the charts.

In 1998, ‘N Sync’ came out with their debut album ‘*NSYNC’, the album featured the hit single ‘Tearin Up My Heart’.

In the year 2000, he made his debut as an actor with the ABC television movie ‘Model Behaviour’, directed by Maggie Lawson.

The rise of his stardom, lead to problems within the band ‘N Sync’, which eventually led to the break-up of the band.

In August 2002, he performed at the MTV Video Music Awards, where his debut solo single ‘Like I Love You’ was premiered.

In November 2002, his debut solo studio album ‘Justified’ was released. The album featured the hit singles, ‘Like I Love You’ and ‘Cry Me a River’.

In 2003, he went on the ‘Justified/Stripped Tour’ with Christina Aguilera and recorded the song ‘I’m Lovin’ It’. The same year he was featured on Nelly’s song ‘Work It’.

In 2005, he played the role of journalist ‘Joshua Pollack’ in the American thriller ‘Edison Force’.

He was seen in films like ‘Alpha Dog’, ‘Black Snake Moan’, ‘Richard Kelly’s Southland Tales’ and also appeared as young Elton John in the song ‘This Train Don’t Stop There Anymore’.

In 2006, he made a cameo appearance in the video for Nelly Furtado and Timberland’s single, ‘Promiscuous’.

On September 12, 2006, his second solo album titled LoveSounds’ was released. The album featured the all-time hit songs ‘What Goes Around… Comes Around’.

In 2007, he made an appearance in 50 Cents album, Cutis and he also co-wrote, produced and offered vocals for the songs ‘Nite Runner’ and ‘Falling Down’ for Duran Duran’s album ‘Red Carpet Massacre’.

In 2010, he appeared as ‘Sean Parker’, the founder of ‘Napster’ in the David Fincher film ‘The Social Network’.

In 2011, he starred in the film ‘Friends with Benefits’ alongside Mila Kunis. The film was a major box office hit.

In 2013, his third studio album ‘The 20/20 Experience’ was released, the album was one of his best-selling albums.

His song ‘Cry Me a River’ won him a Grammy Award for Best Male Pop Vocal Performance in 2004. The ‘Rolling Stone’ magazine ranked the song at number 20 on its list of ‘100 Best Songs of the 2000s’.

His album ‘LoveSounds’ received several Grammy Award nominations and sold over ten million copies worldwide. The album was peaked at the number one position on the Billboard 200.

In 2004, he won Grammy Award in the category, ‘Best Pop Vocal Album’ for the album ‘Justified’ and won another Grammy for the song ‘Cry me a River’.

In 2007, he won Grammy Award in the category, ‘Best Dance Recording’ for the song and won another Grammy for ‘Best Rap/Sung Collaboration’ for ‘My Love’.

In 1999, he started dating Britney Spears and they were in a relationship until March 2002.

In 2003, he became romantically involved with actress Cameron Diaz and the couple broke-up in 2006.

In 2007, he started dating actress Jessica Biel and they got married in 2012. In 2008, he announced that he suffers from attention deficit hyperactivity disorder and obsessive–compulsive disorder.

In 2004, this famous singer tore off a part of Janet Jackson’s black leather costume during the halftime of the ‘Super Bowl XXXVIII.

This Grammy Award-winning singer once pushed a 15-year-old girl against the wall and shouted at her because she said that he was not as cute as singer JC Chasez.

In January 2013, Timberlake returned to the music scene with the hit single “Suit & Tie.” The song appeared on his album The 20/20 Experience released that March, reaching the top of the album charts in its first week. Before the long-awaited album was released, Timberlake performed “Pusher Love Girl” and “Suit & Tie” alongside Jay-Z at the 2013 Grammy Awards ceremony.

Timberlake continued to enjoy this wave of success in August when he picked up the VMA Vanguard Award at the MTV Video Music Awards. At the ceremony, he gave an impressive performance, which also featured a reunion with his *NSYNC bandmates.

In the spring of 2016, Timberlake released the lead single “Can’t Stop the Feeling,” which is featured on the DreamWorks animation Trolls, in which he is also an executive music producer. The track went straight to No. 1 on the Billboard Hot 100, as well as 16 other countries.

In January 2018, Timberland dropped the first single from his upcoming studio album, a slow bedroom number titled “Filthy.” He followed later in the month with the Top 10 hit “Say Something,” featuring Chris Stapleton. The album, Man of the Woods, which also includes collaborations with Timbaland and Pharrell Williams, was released shortly before the singer’s performance at the Super Bowl LII halftime show in early February.

The Super Bowl gig generated controversy well before Timberlake took the stage, with the hashtag #JusticeForJanet circulating on social media among Jackson fans who felt she took the brunt of the fallout from the 2004 Super Bowl show. Furthermore, the rumor that Timberlake planned to perform with a hologram of Prince incited additional backlash, as fans cited an interview in which the deceased music great specifically stated his opposition to that sort of special effect.

Timberlake eased his way back into the public’s good graces during an April performance in Detroit when he stopped his show to acknowledge a fan waving a sign saying she was pregnant. The fan posted a clip of her big moment to Facebook, generating more than 26,000 views in less than 48 hours.

On July 3, Timberlake released a new track, “SoulMate.” To some critics, the samba-like, beach-ready jam marked a welcome return to his roots, following the unevenness of Man of the Woods.

1. “There’s nothing wrong with shooting for the stars.”

4. “The way I grew up, I was always taught that it’s uncouth to talk about money, and that’s not what should inspire you.”

5. “Just writing and being in the studio was like therapy for me.”

6. “I was raised in a very humble environment, and I was always taught to be humble to the things that are happening in my life because they’re blessings. They’re blessings in every way. Whether you’re able to help someone get through a tough time in their life through your music or through comedy, or whatever it is, you’re just a channel.”

7. “Gossip is called gossip because it’s not always the truth.”

8. “I believe people can move things with their minds.”

9. “You cannot make a difference unless you’re different.”

10. “You’re not meant to do what’s easy, you’re meant to challenge yourself.”

11. “If I’m not learning from something that I’m doing, then that means I’ve done it before. Do something different, even if it’s within the same medium.”

12. “Listen, I’m not cool. Being cool is about keeping your blood pressure steady. So no. Don’t be cool. Be passionate. Be dedicated. Be tenacious. Be uncompromising. Be pissed. Be happy. Be sad.”

13. “I think people sometimes don’t pay enough attention to what they do. I’ve done well, but the reason is pretty simple: I’ve worked my ass off. The toughest thing a performer can do is make it look as if it comes easy.”

15. “The teachers that we actually learn more from are the ones that taught us life lessons more than trigonometry. And they have such a huge responsibility and they’re under-appreciated and underpaid. So that’s my opinion of teachers.”

Currently, Justin Timberlake’s Insta followers are 63.8 million. On Twitter, the total number of followers is 63.2 million.

Here are the Top 10 Movies of Justin Timberlake.